Relationships: True Stories of LA’s Muslims and Jews
The scene looked more like a set-up for a cabaret performance than an interfaith exchange. Blue and red lights highlighted the two microphones on stage. Cocktail tables were set up with the seats all facing the same direction. Smiley-faced stamps marked the hands of everyone attending to declare they had paid for their admission.

On Sunday, November 13th, 2011 NewGround convened fifteen Muslim and Jewish organizations for the interfaith dialogue/performance “Relationships: True Stories of LA’s Muslims and Jews.” Two emcees – the young woman rabbi executive director of NewGround and a Muslim academic who donned a bright pink hijab took the stage to set expectations for the 150 people in the audience.

“We’re here as part of the international Weekend of Twinning that pairs Muslim and Jewish organizations throughout the country. But we wanted to do something a bit different. So tonight, you will hear eight stories – four from Muslims, four from Jews on the theme of relationships… because building relationships is at the core of the work we’re doing here. And personal stories provide the foundation for those relationships.”

A reporter asked one of the emcees, “Why this format? What do you want people to get from these stories that aren’t necessarily about Islam or Judaism?” The emcee responded, “The stories are all about identity… and there are pieces of these different stories that all of us can relate to regardless of whether we’re Muslim or Jewish- family struggles, identity questions, relationships to our communities… These stories humanize us and hopefully will provide the foundation for people in the audience to start conversations and build connections.”

The “relationship” thread tying together all of the stories was barely noticeable but strong enough to unify the evening’s content. One story teller shocked the audience when his story began with a statement not generally shared in polite company. “A Jew is someone who doesn’t pass the ball.” Or so he thought from the remarks of his fellow 7-year-old friends growing up in the streets of Cairo. That notion evolved as he went on to befriend Jews and even live with an Israeli roommate. Another storyteller detailed the blessings and agonies of interfaith dating. “A fish and a bird can fall in love, but where do they live? In a marsh…” She asked the audience with a vulnerability that did not glaze over the difficulties of loving someone from a different background, “Can I live in a marsh?” Another storyteller came out as gay to the audience during the course of sharing her evolving relationship with herself. “I’m a daughter, a Jew, a social worker, a student, a sister, and I’m gay.” She shared how the Jewish community played a central role in her embracing all aspects of her identity. 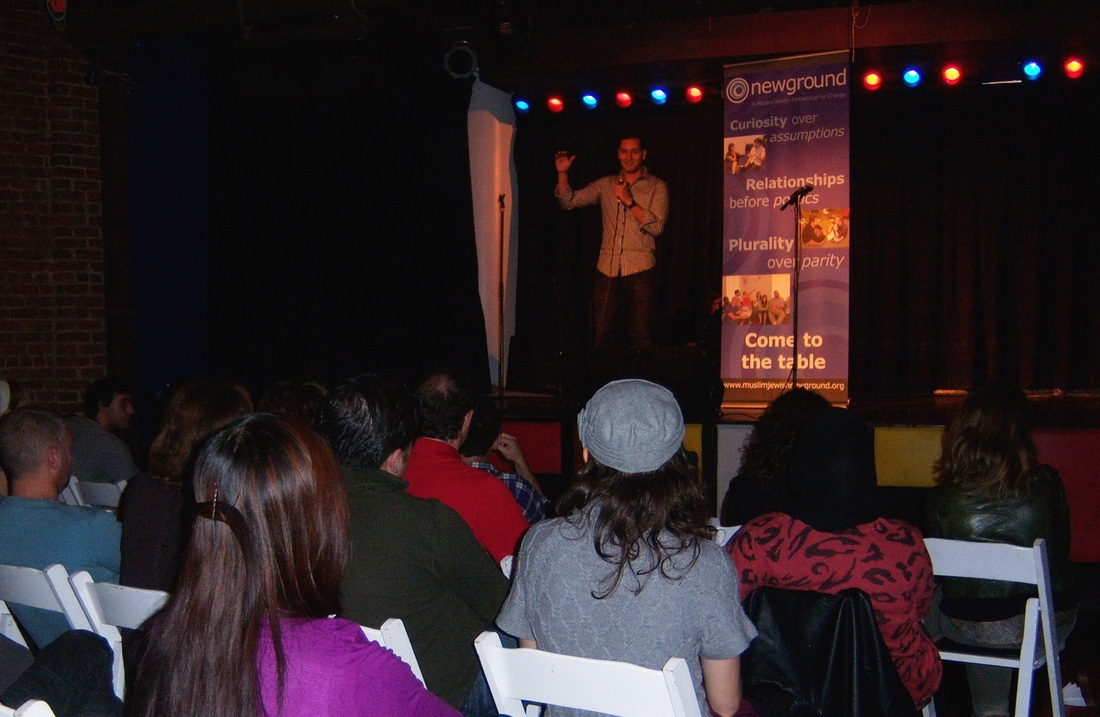 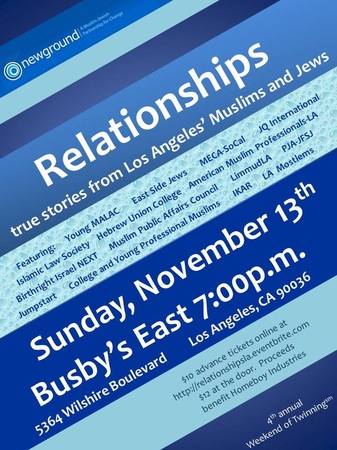 During the intermission, people took the opportunity to peruse through the tables representing the cosponsoring organizations. Only at a college student life fair could one expect to see a scene with diverse organizations like these in the same room – Birthright Israel NEXT, The Islamic Law Society, Young MALAC- a Muslim civic engagement program, LimmudLA- the Jewish learning conference. But at a college fair, these organizations would not all be lined up next to each other. Muslims and Jews learned not only about the opportunities in their own community, but also about the parallel work going on in the other community.
Although the stories ended shortly after 9:00, the crowd did not dissipate for more than an hour as people mingled and shared their favorite pieces of the evening with strangers they had just met. The event also succeeded in raising $1,200 for a local gang-rehabilitation organization – Homeboy Industries. For the 15 organizational cosponsors, it was an important statement that the event would serve a purpose larger than just bringing Muslims and Jews together.

“It’s imperative for us to engage the larger community as Muslims and Jews… and as Muslims and Jews in partnership.” These cosponsors are already talking about future collaboration, other organizations to include, and what next year’s event will look like. If you have any thoughts about the 2012 Weekend of Twinning event, we are happily accepting theme suggestions now.

See this write up in the Jewish Journal by one of the storytellers: “Muslims and Jews Break Down Walls, Find Common Ground.” The event was also featured on the social justice website www.actionnownetwork.com.